Leaving the world brighter than you found it

As far back as I can remember I always wanted to draw cars. Years later, that very same compulsion would turn into a full-on devotion to sustainable design thinking.

I came from a typical immigrant family. My father was a dentist who couldn’t see how I could make a living designing cars. My brothers and I had decided that we didn’t want to stare at tobacco-stained teeth for the rest of our lives (it was the 70’s, after all). My father nevertheless implored me to follow a more reputable career path, but my own renegade creative journey was just beginning.

I had three primary questions: What is design? How are cars designed? And can you make a living doing it?

After graduating high school one year early and emigrating from Taiwan to sunny California, I found myself looking at my prospects – though I didn’t have the privilege, nor the benefit, of talking to a guidance counselor. You know that old expression, “having the book thrown at you?” I quite literally had a book thrown at me – one that was titled “A Complete Book of United States Colleges and Universities”.

The listing was alphabetical. I dutifully started from page one; I didn’t make it too far past the C’s after I became entranced by the temptation presented by ArtCenter College of Design. Though I applied to a few other schools, there was one image that I will forever associate with ArtCenter – one that influenced my decision to go there. It was a full two-page spread of a student illustrating a fully functional automobile. That was all the convincing I needed.

Even before I became interested in cars, I always harbored a desire to create. Recently, my creative focus has shifted toward the next generation of designers – and what we will leave for them after we are gone. I think about the world that my daughter and grandson are living in. My own philosophy of design pivoted in accordance with the world’s changes. One of the biggest misconceptions about design is that it’s purely aesthetic – it’s not. It’s about leaving this world better than you found it.

The equation is simple: you are either complicit in adding to the world’s growing surplus of garbage, or you are working to reverse the process. I decided that I could no longer contribute to this growing divide and began researching the inception of a product that would put me on the right side of this equation. 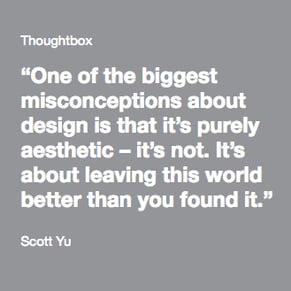 The result was Vode Lighting. Vode stands for voice of design – for the environment and for energy-efficient, sustainable design. Together with my partners and our incredible team, we strive to create products that make use of renewable sources and never fall out of fashion. Think about it: a car lasts ten to fifteen years, and a good computer lasts you about five. The light fixtures we’re currently working on are designed to last fifteen years or more… and we’re just getting started.

I truly believe we are all responsible for the next generation, as well as those we share the planet with. What if we could make a product that would last 50 or 60 years? The more integrity that a piece of design has, the less constant tinkering it will require. What impact would that have on the world and its waste stream?

Vode is not only in the business of creating light. We also create livelihood. The people who work for us are passionate about what they do. Our company has very little turnover, because our employees understand that their purpose here is a noble one. By calculating exactly how much energy we are saving, we are starting to effect real change in our world.

My whole life, I have used illustration to communicate what I couldn’t through language. After all, English is not my first language. ArtCenter helped me to communicate visually, and it gave me the skills necessary to create my own brand. It taught me that resources such as talents and money allow us to cast a wider net in terms of problem-solving – and that a multifaceted team is the engine that keeps the car running.

People sometimes ask me “what is design?” To me, it’s an exploration: a purposeful process for a better world than the one I’ve inherited.