Cutting down the lighting lumens to shave off the pounds 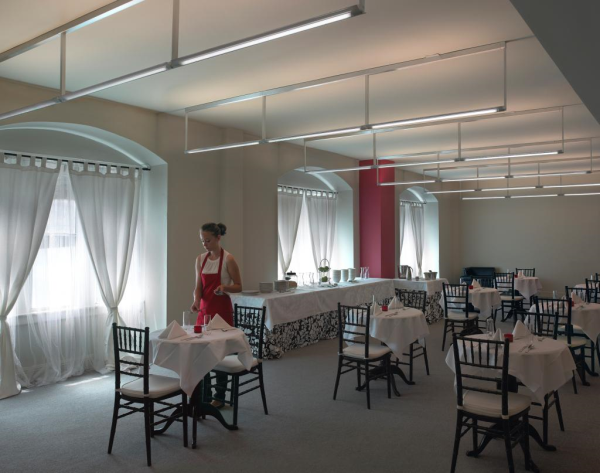 Dimming the lights during a romantic meal does more than set the mood.

Lower lumen outputs may also help you lose weight. In addition to sweating off a few pounds at the gym or lowering your intake of sweets, turning the lights down low may help you reduce your calorie intake. According to a 2012 study originally published in Psychological Reports, dimmable commercial lighting design in conjunction with milder music can be used to get people to avoid wolfing down their meals, Reuters reported.

The researchers made adjustments to the lighting and music - implementation of indirect lighting and instrumental music - in half of a Hardee's restaurant in Illinois. The changes also included the placement of paintings, tablecloths, plants and candles. Researchers noted that customers in the modified part of the restaurant consumed 18 percent fewer calories than guests on the normal side.

"When we softened the lights and softened the music in the restaurant it didn't change what people ordered, but what it did do was lead them to eat less and made them more satisfied and happier," Brian Wansink, a professor of marketing and consumer behavior at Cornell University in New York, told Reuters.

Wansink and co-author Koert Van Ittersum, of the Georgia Institute of Technology, noted that too much stimulation from music and lighting does not promote relaxed eating. Hindrances to a calm environment included stimulating colors, excess lumen output from the lighting and loud music.

Customers who ate under the restaurant's normal conditions ate longer and more than their counterparts. Wansink stated that relaxed environmental conditions prompted guests to eat more slowly and feel fuller faster. Rather than scarfing down their meal, they spent more time chewing and enjoying their food.

Jackson Blatner, author of The Flexitarian Diet, told Fox News that more relaxed eating can even help with getting in the habit of eating smaller portions.

This information is not to say that exercise and a well-balance diet should be thrown out the window, but it does support the use of dimmable indirect LED lighting in hospitality settings. Even if guests are not looking to knock off a few pounds, the restaurant owners may be able to reap the benefits of higher guest satisfaction and see more repeat service.