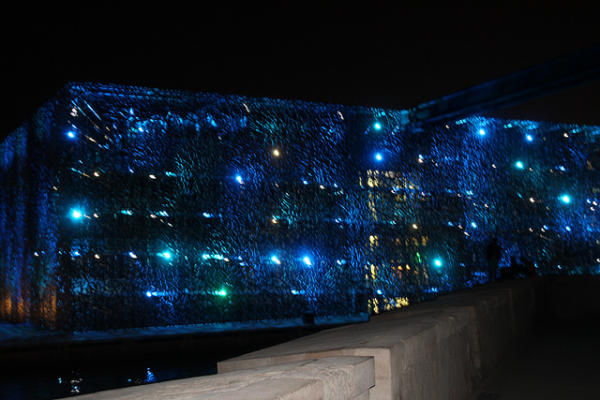 The specification of low profile lighting at the Museum of the European and Mediterranean Civilisations in Marseille, France, creates an explosion of light from hidden fixtures on the seafront in the city's Old Port area.

The three-building project - which features a modern cube structure designed by architect Rudy Ricciotti as well as retrofitted lighting at the Old Port and Fort St. Jean - utilizes fixtures that are concealed to draw attention to both the innovative architecture of Ricciotti's design and the historic structure of Fort St. Jean, according to Mondo Arc.

Bringing the Old Port to life

The construction of MuCEM was part of an effort by the city of Marseille to give itself a facelift preceding its role as 2013 European Capital of Culture, the Architectural Review reported. Lighting for the project was designed by four firms: AIK, Licht Kunst Licht, 8'18" and L'Agence Lumière. They were tasked with specifying fixtures that provide a wash of ambient light to the exhibits without being too obtrusive to visitors during the day.

To accomplish their goal, the teams utilized many integrated fixtures, including indirect LED lighting. The result was a blue and turquoise glow that could spill into the sea in the evenings while the fixtures were unnoticeable during the day.

A glowing cube of blue

The main attraction of the MuCEM project is the cube-shaped building located on the J4 pier. A facade created from ultra-high-performance fiber concrete covers the south and west sides of the building to reflect illumination from the concealed fixtures onto the neighboring sea, an effect meant to mimic the crystal blue of the water in the evening.

More than 200 4240-Le Havre fixtures are placed between the glass outer wall of the structure and the facade using custom brackets designed for each individual location. In conjunction with strict calculations for the optics, the fixtures are able to create Ricciotti's vision for the J4 building.

The interior features LED projectors and strips to create a minimalist lighting scheme while enveloping the exhibits in light. The projectors are fitted with barn doors to restrict light scallops and create a precise beam of light for each exhibit. They can also be focused between 10 and 65 degree half-beam angle and dimmed to pull visitors' eyes to the each display. Concealed LED strips add more illumination for the individual display cases. 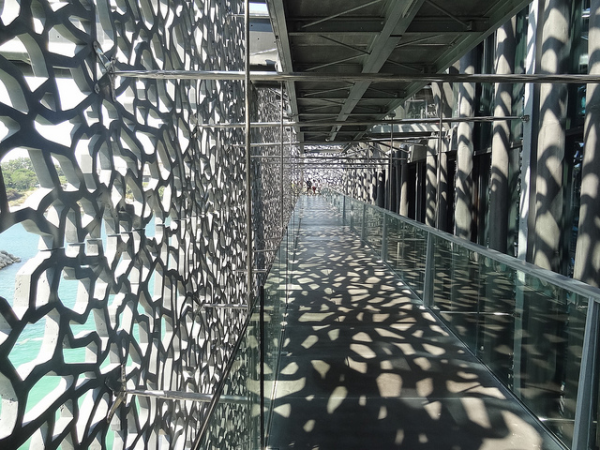 Fort St. Jean was constructed more than 400 years ago under orders from King Louis XIV, and construction to make the fort part of Ricciotti's MuCEM project began in 2005. When work first began, LED lighting was not as efficient, but as the technology evolved, it became the appropriate choice for highlighting the iconic architecture of the building.

The interior features LED spot lights and projectors for the exhibits as well as 16-millimeter fluorescent linear lighting fixtures - which are controlled via daylight sensors - in the classrooms and library.

A perforated metal facade hides an exterior staircase that wraps around the outside of the building. The stairway is illuminated to punch beams of light through the perforations and a directional LED strip is attached to the north facade. The exterior also features lighting that is integrated into the furniture located in the fort's courtyard entrance from the Old Port.

In addition to upgrading the lighting, the fort revitalization includes a footpath connecting Fort St. Jean to the neighboring J4 building, which is illuminated by the cerulean aura of the cube as well as commercial LED lighting on the exterior of the fort.